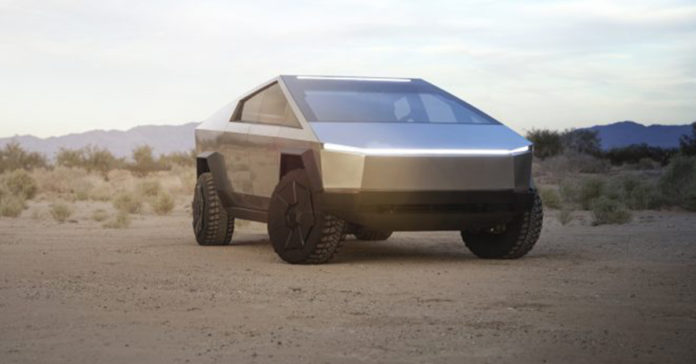 The whole world gasped when Tesla’s Cybertruck was released on 21st November. This stainless steel, angular,all-electric pickup truck already has got more than 250,000 pre-orders according to Elon Musk; the CEO of Tesla, Inc.

This revolutionary truck has attracted the attention of many people so far.

Marques Brownlee, who has pre-ordered a Cybertruck, points out the reasons for his decision. When he had the test drive on Cybertruck, he could realize that this truck is special from other pickup trucks. And the shape of the truck is not what he, including the others, clearly expected. Tons of glass and tons of space are in there with plenty of headroom and foot room. The rearview mirror is a display which shows the rear-facing camera. And above all, this stunning truck has no DNA from any other Tesla models.

Among many specialties, one is that the structure is stainless-steel “exoskeleton.” The steel was undamaged when the demo literally hit it with a sledgehammer. Yet the windows are less stronger than the steel as they were cracked with a metal ball in the prototype.

This EV, starting from 40000$ has the same stainless steel alloy as in Musk’s other company, SpaceX. Also, the Cybertruck has lithium-ion batteries, hardware software and for self-driving with a solar roof option to boost the Cybertruck’s range. Plus the bed in this truck has created to provide ample space and the ability to tie things down.

According to Brownlee, what amazes him is the polarizing angles and the line choices of the truck. It’s clear that there’ isn’t a single curve in this truck, which makes it pretty striking from any other truck. This is why Cybertruck is highlighted from its competitors. With this iconic Cybertruck, Tesla has taken the trucks to a whole new level. And this is the reason why Brownlee decided to pre-order a Cybertruck.

Alexandra Mary Hirschi aka Supercar Blondie also has pre-ordered a Cybertruck’s. She has been a super fan of Tesla technology. However, she says that she is a bit disappointed with the new car as it’s not that ‘supersexy’.Hirschi, too comments positively on the durability of Cybertruck’s “exoskeleton” and the bed with the in-built ramp which is effective for its users.

Well, she had the same expression as Brownlee when he first saw the Cybertruck.  Hirschi goes on recording the first impressions of her fans of showing a photo of the Cybertruck. Like her, most of them don’t quite get on well with its robot-type appearance.